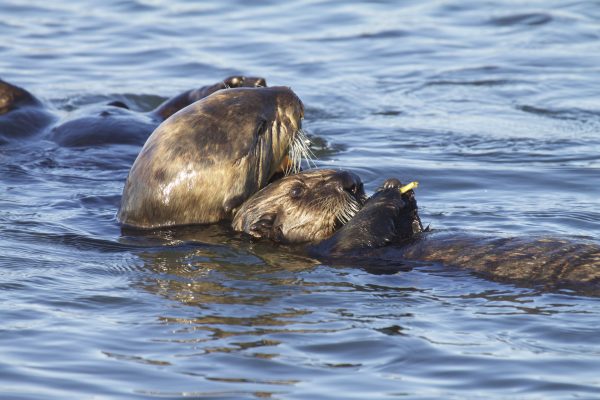 Are you ready for Post Three in my month-long celebration of Sea Otter Awareness Week?  Today, Lilian Carswell, the Southern Sea Otter Recovery and Marine Conservation Coordinator for the US Fish and Wildlife Service, talks threats. 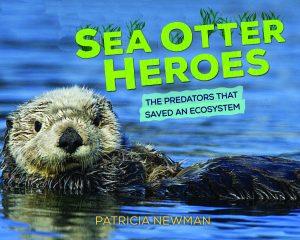 “A terrific book for use in elementary and middle school science classes, this is a book that “otter” be added to collections everywhere.” —Booklist Reader

Post Three:  Lilian on the future of sea otters and the threats they face

Patricia Newman:  What continuing threats do sea otters face? Can you tell us something new in the world of sea otter conservation?

Lilian Carswell:  Sea otters are very vulnerable to oil spills, and they can also be harmed or killed by harmful algal or cyanobacterial blooms (land-based pathogens that find their way into the ocean), entanglement or entrapment in fishing gear, boat strikes, and gunshots. Repeated disturbance of resting sea otters can also be harmful. However, by far the largest proportion of mortality is caused by white shark bites. More than half of the southern sea otter carcasses recovered along the California coastline show evidence of a shark attack.

As to why shark bites have increased so much, we’re really not sure. The sharks don’t eat sea otters–rather, it’s a case of mistaken identity. They are actually targeting fat-rich pinnipeds like elephant seals and sea lions. It’s possible that pinniped recovery, including an increase in the number and size of rookeries along the coastline, is drawing sharks to new parts of the southern sea otter range where they were previously not much of a factor. It’s also possible that gill net restrictions that took effect in the mid-1990s are allowing many more juvenile sharks to survive the transition from fish-eating youngsters to mammal-eating adults. Still another hypothesis is that it’s an effect of larger scale climatic changes, which may be altering the distribution of white sharks. We don’t know which factors, or combinations of factors, are at work.

What we do know is that the marine ecosystems off California suffered an onslaught of abuse beginning in the late 1700s and continuing for at least the next two centuries as a result of the maritime fur trade, sealing, whaling, overfishing, and bycatch in fishing gear, which devastated populations of marine mammals and large fish. As a result of state laws to protect sea otters, white sharks, and other marine organisms and landmark federal legislation like the Marine Mammal Protection Act (MMPA) and Endangered Species Act (ESA), we are witnessing the recovery–though at very different rates–of some of these species. So while sea otters likely suffered from white shark bites in historic times, there are so few sea otters in California now (about 3,200) relative to their historic abundance in California’s waters (about 16,000) that it’s a significant blow to the population. To make it worse, the number of white shark mortalities is highest at the northern and southern ends of the mainland range, precisely the areas where high densities of sea otters are needed to drive range expansion. Range expansion is going to be necessary for any kind of sustainable recovery under the ESA, and it’s certainly necessary to reach the goal of the MMPA, which is to restore marine mammal populations to levels at which they resume their ecosystem functions in their native habitats.

California estuaries are a bright spot for sea otters in this situation, as they provide some safety from white shark attacks and shelter from rough weather, but as of now, sea otters have recolonized only one estuary in California, Elkhorn Slough in Moss Landing. When sea otters ultimately recolonize San Francisco Bay, where thousands of sea otters once lived, the subspecies will be much more secure–and the bay will also benefit ecologically from the return of a keystone species.

On Monday:  Ways in which sea otters impact their environment

Dr. Brent Hughes, the scientist who solved an ecological mystery involving sea otters, talks about the subtle ways in which they preserve ecosystems for marine life–and us.

If you want more before the next post, visit my Sea Otter Heroes webpage to learn more about my writing process and my advice to young writers.

While reasearching Nugget on the Flight Deck, I stumbled across[...] 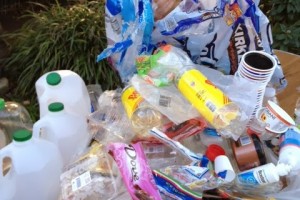 Is PLASTIC, AHOY! made with plastic? #3rdchat #4thchat #5thchat #6thchat

In early February, I received the following question from a[...] 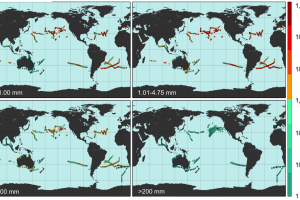 In Plastic, Ahoy! Investigating the Great Pacific Garbage Patch I[...]

Tell me what you think... Cancel reply