And the quotes keep coming (more from SCBWI LA 2009) 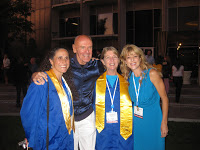 And the quotes keep coming (more from SCBWI LA 2009)

When Richard Peck speaks, the quotes come fast and furious! Here are a few of my favorites from today’s sessions–
Richard Peck: “A story is always about going forward because you can never go back.”
Dan Yaccarino on his books in print: “I wasn’t second guessing the market. I was doing what I love and what was in my heart.”
Marla Frazee on picture books: “It’s not the author and illustrator who collaborate. It’s the words and pictures that collaborate” and “Illustration acts like a soundtrack in a film. It amplifies emotions.”
Richard Peck: “Boys do not want to make imaginative leaps; they want to make clear connections.”
One more day of inspiration, and then back to work!
Tags: Conferences
1 Comment
Share
0

Linda Singleton and I recently judged a writer’s conference sponsored[...]