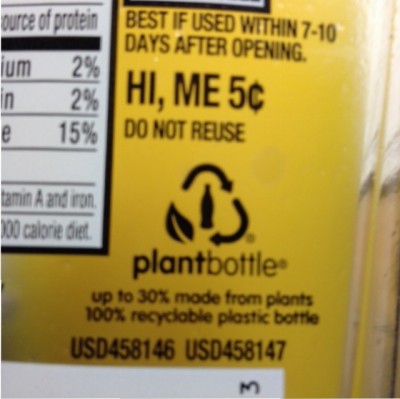 Usually I buy orange juice in cardboard cartons to avoid plastic bottles, but one day my grocery store didn’t have any more cartons, so I turned to the plastic bottles in the refrigerator. One brand bottled its juice in a plastic PlantBottle, and it started me wondering. What’s a PlantBottle? Does it biodegrade? Is it more sustainable than petroleum-based plastic? The label says its recyclable, but are recycling centers treating the PlantBottles differently?

First off, I have to say that my research for Plastic, Ahoy! Investigating the Great Pacific Garbage Patch has made me skeptical of biodegradable plastics. What are the by-products of the degradation process? How long does it take to degrade? Biodegradable plastic might be good news for our landfills, but it’s not a license to toss trash on the streets or on the beach.

According to a three-part audio program out of Florida State University’s media station WFSU (Part I, Part II,  and Part III), a Georgia-based company is making biodegradable plastic from locally-grown canola seeds. Oil extracted from the seeds is fed to bacteria that turn the oil into plastic polymers. Good news, right? Plastic from something other than petroleum.

The CEO of Meridian Holdings Group (MHG), Paul Pereira envisions a closed-loop system. For example, MHG grows canola and harvests the seeds to crush into oil. The oil is sold to Chick-fil-A to fry french fries. The used cooking oil is returned to MHG to make plastic cutlery, bags, and containers for Chick-fil-A. The used cutlery, bags and containers decompose on the canola fields to nourish the soil. Again, sounds good, right?

The oil industry is, of course, worried about their profits. Recyclers have questions about the plant-based plastic mixing with their petroleum-based items. If bio-plastic is mixed with petro-plastic, will the quality of recyclable plastic be downgraded? Will the recyclers’ loads be altogether rejected? If that happens, then our recycling industry suffers.

The question remains: is bio-plastic far enough along to replace petro-plastic? Probably not. And most of the plant-based bottles, bags, etc. are blended with petroleum-based plastic. For example, my orange juice bottle says “up to 30% made from plants,” which implies that sometimes less than 30% bio-plastic is used. So picture this:  the one-third PlantBottle bobs along on ocean currents. Thirty percent will degrade quickly, but we’re still left with 70% polluting the ocean. 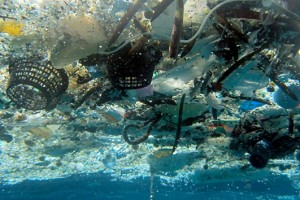 Rethinking our relationship with plastic 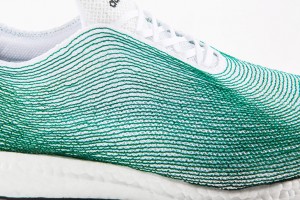 The sole of the sneaker is made from sustainable materials, the upper from recycled ocean waste. --Adidas

by Molly Vincent, Guest Student Blogger As awareness spreads about[...] 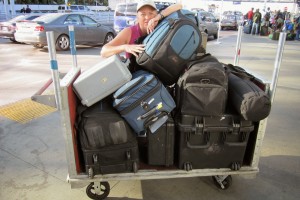 Annie with 7 bags of photographic equipment, and one tiny suitcase of personal items!